skip to main | skip to sidebar

The water was never cold as far as he was concerned. The bugs never bit, and the bears never tore up the garbage, and the outhouse never smelled either. Not on his island.

It was my island too. I could climb just as many rocks and catch just as many fish as he could, even if I was a girl. I was just as good at pumping the well water without muddying up my feet. I was even better than he was at toasting up marshmallows without singing them. Mine were always perfectly golden and melt-in-your-mouth delicious. I was known for it. A legend.

But I always knew the water was cold enough to steal the scream right out of your lungs if you jumped straight off the dock like a lunatic. And I knew the “‘skito” bites could keep you up all night long, half crazy with their itching. That the deerflies could rip a whole chunk out of an unprotected shoulder or the unguarded bit toe poking out of the sand as you lay buried to the neck under a mound of sand packed so tight your arms felt encased in cement, leaving you helpless.

I guess that’s why he was king of the island. He knew every gully and every tree like that back of his hand. He could ferret out the juiciest wild strawberries and knew how to suck the most flavour out of a winterberry leaf, rolling it tight as a Cuban cigar and jamming it into the hollow between cheek and gums like a ballplayer’s chewing tobacco.

In the summer he’d turn a deep honey gold from head to shirtless torso to his shoeless feet – He’d have gone pantless if he’d thought they’d let him get away with it.

Me, I’d burn; every summer fast and furious. I’d arrive pale as the crescent moon and by the end of day one would be suffering the effects of a raging sunburn that required, without fail, that I spend the first of my precious weeks there penned in and covered in cold cream doing the same puzzles with the same infuriating missing pieces while sitting on the screened in porch watching the world go by. My only solace then was his drive-by water gun showers and the occasionally presentation of a “authentic” Indian arrowhead he’d dig up from somewhere deep in the mysterious woods that surrounded our cabins and made us feel like we were living on the edge of the world.

When I was finally freed, he’d make his amends for his near total abandonment, sitting with me on the waterlogged dock telling me alternating stories of his great adventures and of how bored he’d been without me as he gently picked the tempting flakes of peeling skin off of the places that I couldn’t reach.

I loved it when he did it; his hand absently brushing against my neck, along my back to where the bright green nylon of my bathing suit pressed against my shoulder blades, occasionally snapping the straps, but not meanly, I wasn’t burned by then.
It felt cozy and friendly when we sat like this, the two of us sharing our secrets in the sun. It felt happy and easy and fun.

Right up until the time that it didn’t.

The time that summer I arrived to find him bigger than I remembered, bigger than I could ever imagine him being. That was the summer my mother made me wear a cotton harness under my shirts. Even when it was super hot; even when I was just sitting on the dock, my nose buried in a Nancy Drew book, waiting for him to finish playing his stupid war tag with the other stupid camp boys who said I wasn’t good enough to play.

The same summer he’d stolen a cigarette from his dad’s pack for us to try hidden away in the woods holding the ashes in our palms terrified we’d start a forest fire. It was the summer our mother’s wouldn’t let us plan our annual sleepover on the little island just off shore where we’d been holing up in a pup tent since as long as I can remember, telling corny ghost stories so that we’d get scared, but not too scared.

That summer I still burned, even worse than before in the two-piece bathing suit my mother had bought me so that I wouldn’t get “tan lines” which concerned her greatly.

He still came to see me trapped in my mesh prison; driving by on the cruiser bike he’d bought himself over the winter with the money he’d made stocking shelves at his dad’s friend’s store.
When I was finally sprung he still sat with me on the dock inspecting my war wounds and talking up a storm. And he still put his hand on my neck, but it was heavier that summer; heavy and clammy. When it slid from my neck to my shoulder I felt the weight of his whole arm. Felt the muscles in it flexing. It was solid like the dead heads floating by, the ones we weren’t allowed to swim out to and try and stand (but he did anyway).

And he felt close, but not cozy. We shared no secrets, by then we weren’t speaking and all I could hear was his breathing and that’s how I knew he was leaning nearer even though I had my eyes squeezed so tight that all I could see was the electric storm playing against my eyelids. And I wanted so badly to get away that I was willing to risk freezing to death in that cold black water just to be able to slip down into that deep safe darkness.

But I didn’t want him to let go.

7:36 PM Edit This 0 Comments »
I am done with the Facebook. Too much time suckage. I am ready to turn my attention back to an online medium that I can barely bring myself to access once a year.... imagine all the other things I'll get done!

Back in the saddle

7:19 PM Edit This 0 Comments »
Today, today was a big day. Bought myself a bike today and now dusting off the "Blog" bigger and better than ever... THIS is kerrysay 2.o. Watch yourselves.

Weep Not For The Urban Son

7:34 AM Edit This 0 Comments »
You may weep over the loss of wholesome family experiences and the consequent angst and apathy this loss has created within today’s urban youth.

I take comfort in the fact that it is not altogether true. I know for a fact that city-bred boys are still excited by simple pleasures, like the joy of a father son fishing trip. They just express it differently. Like so (as overheard on the TTC one evening… no, seriously.): 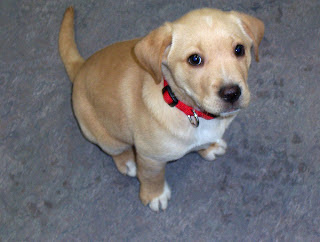 An Ode to Limestone 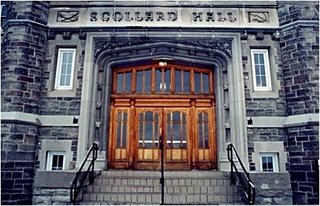 It’s been ages since I stuck anything up in here. And will be a little while yet before there is anything worth reading.

In the meantime I offer you these random photos of the front of my highschool.

Because it’s kind of pretty. And my reunion was cancelled. And I have not yet adequately exorcised the nostalgia that arose at the thought of actually being old enough to be the kind of person that could contemplate going to a highschool reunion. 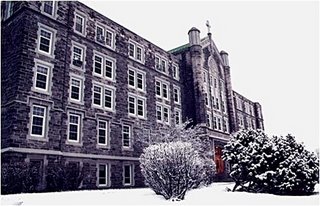 Kerry Says
Toronto, Canada
Writer and girl about town. Like what you see here? Check out my novel "The Year She Left"